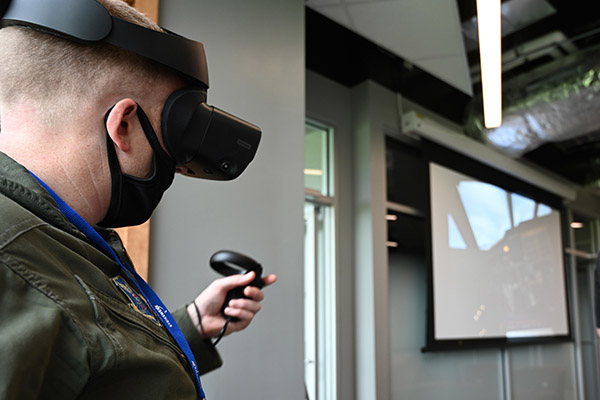 BARKSDALE AIR FORCE BASE, La. (AFNS) — A new virtual reality trainer is one step closer to potentially transforming the way B-52 Stratofortress student-pilots train for combat.

The Virtual Reality Procedures Trainer, released during a milestone demonstration of its capabilities on July 7 at StrikeWerx in Bossier City, Louisiana, may even change the entire Air Force bomber community’s approach to training.

“Our adversaries are getting much better, much faster,” Budgeon said. “This system has the potential to revolutionize the entire training process and make our student graduates better.”

The three Airmen teamed up with King Crow Studios, a virtual reality training company from Baton Rouge, Louisiana, to develop it as part of a larger learning management system that uses virtual reality with an embedded instructor to teach and grade B-52 student pilots.

The demonstrator was able to practice going through the entire ground procedures checklist just as a student pilot would prior to take-off.

During the demonstration, Budgeon, an active-duty Airman, and Wolf, a Reserve Airman, explained several ways the VRPT can improve current training practices.

The main advantages of the VRPT are its potential to reduce human bias in instruction, provide better access to training for student pilots, and give students immediate feedback that lessens the chance they develop poor habits in the early phases of training.

The VRPT has the potential to eliminate that problem.

It employs virtual reality goggles, a computer and two hand controls. These portable items can be used almost anywhere to generate the virtual B-52 cockpit.

“It would be accessible to them all the time, so they can take it home and practice,” Wolf said. “They become familiar with it, and we won’t get that deer-in-headlights moment when they first get in the simulator or B-52.”

The program also has the capacity to collect data on student performance with timestamps that show speed and errors. That data can be used by instructors to provide immediate feedback.

“It catches mistakes early on a human might miss so that instructors can create a process for correcting them,” Wolf said.

The three pilots also stressed ease of use with the new system.

“Its operating system is intuitive, so all we have to do is hand it to them and say ‘go’,” Budgeon said.

Budgeon, Wolf and Stephenson hope the trainer moves into the third phase of the contracting process and is adopted by the 307th Bomb Wing to train all incoming B-52 student pilots for the Air Force.

If adopted, the three Airmen are eager to press forward with similar trainers for the jet’s weapons systems officers and electronic warfare officers.

“We can do anything in this environment,” Louviere said regarding the training capacity of virtual reality. “We are here at the right time because technology is advancing exponentially.”