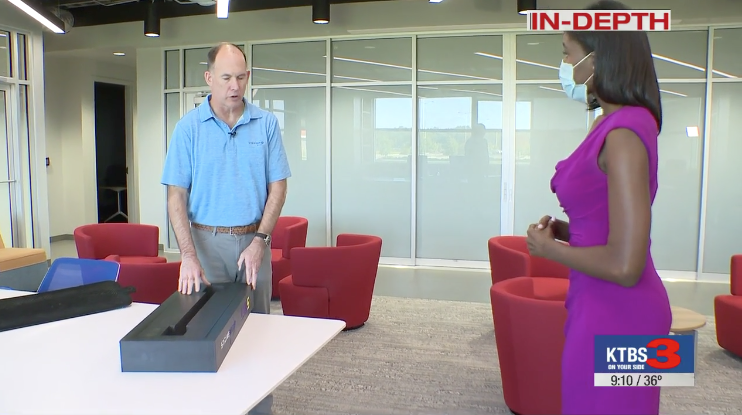 The following article was published by KTBS 3 highlighting STRIKEWERX

BOSSIER CITY, La. — Making operations and tasks smoother for service members in the Air Force is the goal of a new program called STRIKEWERX. The ideas come from airmen and women, the execution comes from a collaboration with the community.

The hub of Strikewerx is inside the Cyber Innovation Center, which is located at the National Cyber Research Park in Bossier City and just outside of the Barksdale Air Force Base.

Russ Mathers, director of STRIKEWERX, said his team of four searches for solutions to Air Force problems. The aerospace engineer and former B-52 pilot said the goal is to encourage airmen to come up with the ideas. STRIKEWERX then turns to colleges and businesses to help with the design and execution.

“We’re where academia, industry and government come together to meet,” said Mathers.

Mathers showed KTBS 3 one of its latest project prototypes, which was designed by a Louisiana tech student. Its purpose is to cover what’s called a transporter erector jackpoint, which is a deep hole that a ballistic missile is lowered into.

“We brought in five airmen from the missile fields. We brought in a production company from Wyoming. We brought in professors and students from Louisiana Tech and also from Bossier Parish Community College, so we built a team together to work on that project,” said Mathers.

According to Mathers, if successful the cover will save military members about 400 hours a year of manual labor.

“It’s not just the man hours that they’re saving, these guys are out there on the ground for three hours at a time digging out these covers at -50 degrees. So, it is morale busting work to be out there doing some of that and to be able to make it so that an airmen doesn’t have to do that kind of work, that’s a huge boost to morale,” Mathers said.

The prototype must be tested. Strikewerx’s team collaborated with experts to make one out of steel. It’s 35 pounds and in the intercontinental ballistic missile field in North Dakota being tested to make sure it fits.

Although STRIKEWERX does not pay students, private companies, or consultants, the Cyber Innovation Center has created and filled more than 1,100 jobs at the National Cyber Research Park.

Cyber Innovation Center Executive Director Craig Spohn said the knowledge-based community that they built in technology 13 years ago is now as big as the oil and gas sector, and larger than the manufacturing, finance, and insurance sectors, in North Louisiana.

“We recruited what was called computer science corporation at the time. It’s now General Dynamics and we put together $116 million incentive package to recruit those 800 jobs, and those 800 jobs have grown into 1,100 jobs. And, those jobs are continuing to expand,” said Spohn.

When asked where he sees the program 25-30 years from now he responded, “This is huge. Hopefully, this is something that gets traction across the Air Force and becomes apart of the normal processes.”

STRIKEWERX projects vary from a single afternoon to six months. The program launched in May. So far, its team has completed about five projects.

Click here to see the KTBS 3 video and article here.