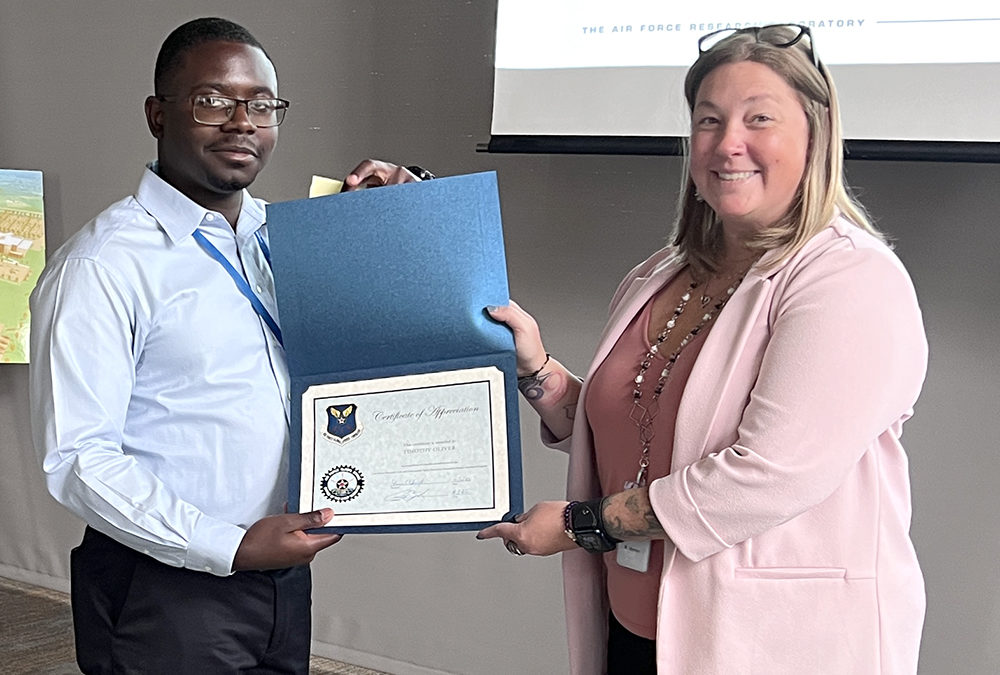 The AFRL Scholars Program is a summer internship for university students pursuing Science Technology Engineering and Mathematics degrees. It is administered via the Cyber Innovation Center’s partnership intermediary agreement with AFGSC. Selected interns will gain hands-on experience working with ARFL scientists and engineers on cutting edge research and technology.

“From past experience with this program, I know the value this program has in giving STEM students real world experience and exposing them to future careers in the Air Force,” said AFGSC Chief Scientist Dr. Donna Senft. “Our involvement in the AFRL Scholars program exploits the knowledge base of higher education to build out new solutions for the command.”

AFRL Scholars benefit from this program via the ability to contribute to unique research-based projects. Graduate interns will be able to collaborate with ARFL on current research and incorporate that research into their graduate work.

The AFRL Scholars Program at Barksdale Air Force Base, Louisiana, offers various technical projects in STEM fields that will enhance AFGSC’s data collection and analytics. Scholars will work on projects selected by the AFGSC Office of the Chief Scientist during a 10- to 12-week summer program at the Cyber Innovation Center, Bossier City, Louisiana.

Tim Oliver, Louisiana Tech University CIS student, is working on System Equivalence and Optimization for the AFGSC A5 Plans and Requirements Directorate.

Oliver described his project as a qualitative comparison of systems or objects. He explained those objects can be as abstract as finding the best path to a destination with GPS or whether two short robot arms can lift as much as one longer arm.

“I set up some groundwork for where the objects can perform their purpose followed by a demonstration that helped make a comparison quite quickly, despite the sheer size of the information I would have to sift through normally,” Oliver said. “I can see the project having use for more complicated systems the Air Force and civilians would employ. For example, security forces could need to compare or verify two cameras’ capabilities.”

He added that the project has opened his eyes to new data analysis methods and given him a glimpse at what he wants to focus on in his career.

“My time on the project has helped me identify areas to focus on and how to innovate current methods and technologies for further research. I think these takeaways will help me greatly in my future career,” Oliver said.